The white skin cancer that originates in the stinging cells (second lowest layer of skin layer 1). This type is by far the most common white skin cancer. It also grows slowly, at first only to the sides, like a weed in the garden.

Contrary to common belief, this is NOT a PRECURRENT skin cancer. The difference to the prickle cell carcinoma (see spinalioma) is only that the actinic keratosis or the in-situ carcinoma is (still) in the skin layer 1 and is separated from the skin layer 2 (where it becomes really dangerous) by the protective film of the basal membrane (green in the diagram).

Actinic keratosis (in situ carcinoma): You usually feel it before you see it: a small rough, slightly reddened area that can disappear completely in between - especially if it is treated with a grease cream - but comes back in the same place. This is an early-stage skin cancer, i.e. it is located in an upper layer of the skin and has not yet broken through the basement membrane. Thus, no metastases can form at this stage.

However, if left untreated, actinic keratoses can penetrate deeper into the skin and develop into spiny cell carcinomas (spinaliomas).

Predominantly people from 45 or 50 years upwards who have spent a lot of time in the sun (often without being aware of it). As a result, light damage to the skin develops first, predominantly on the "sun terraces": the face, such as temples, forehead, nose and cheeks, scalp, especially when men are bald, but also on the backs of the hands, or other areas that have been exposed to the sun.

The first signs of photodamage to the skin can become apparent even before actinic keratosis develops and are serious warning signals: "coloration" of the skin with brown pigment spots ("age spots") or even small whitish spots, "thinning" of the skin with formation of wrinkles, translucent veins, development of bruises even after the smallest impact.

Actinic keratosis usually results from photodamage of the skin.

Normal, undamaged skin (blue) in the places where the sun hardly reached, and photodamaged skin (red) on the neckline and décolleté, with brown and white discoloration of the skin.

You see above an actinic keratosis on the nose, hands and forehead (in the red circle). The area circled in blue is not a basal cell carcinoma, as you might think, but just a harmless enlargement of the sebaceous glands.

Actinic keratosis on the ear. This form cannot be distinguished from a very malignant invasive spinalioma by visual diagnosis, but only by biopsy and subsequent fine tissue examination.

Fortunately, actinic keratoses do not require surgery in most cases. However, it is usually advantageous if the diagnosis is established by a fine tissue (histological) examination and one is then sure that this is not yet a spinalioma, since the latter always has to be surgically removed. There are the following possibilities of a non or little invasive therapy:

Photodynamic laser therapy (PDT or PDLT) has been increasingly used in recent years for the treatment of superficial white skin cancer (actinic keratoses, flat basal cell carcinomas, in situ carcinomas of the Bowen's disease type). The advantages of this treatment, which can usually be performed without local anesthesia, are low invasiveness and scar-free healing with excellent therapeutic success.

How does PDT work? The cells of our body are constantly renewed. In the process, a certain substance, the so-called DNA, provides the blueprint of the genetic material. If small "errors" now occur during cell division - triggered, for example, by many years of exposure to UV rays from sunlight - a malignant degeneration can develop in the cell. Cells with DNA damage preferentially take up a certain substance, aminolevulinic acid (ALA). This is a naturally occurring substance in the human body that is needed in the formation of red blood pigment. From the "sick" cells, ALA is converted into protoporphyrin (PP), which is very sensitive to light. When exposed to light, this substance provokes the decomposition of oxygen molecules into oxygen radicals, which are toxic for the cell - it dies. Healthy skin cells are largely spared. PDT has taken advantage of this repair mechanism of nature. If it is possible to completely convert the ALA in the cancerous skin cells (by applying additional ALA to the skin) into the highly light-sensitive protoporphyrin, the diseased cells can be destroyed by the subsequent irradiation with red light. They are then replaced by regrowing healthy skin cells.

During treatment, there is often a sunburn-like burning sensation, and occasionally pain, which is relieved by cooling. If desired, an anesthetic cream can be applied or the treatment can be performed under local anesthesia. After PDT, temporary redness, brown discoloration, swelling and the formation of crusts may occur on the treated skin areas.
Unfortunately, the costs of PDT are not covered by statutory health insurance, but are usually fully reimbursed by private health insurance.

The latest variant of this form of treatment is the so-called Daylight-PDT, which works with the daylight of our sun, but only in the light-rich season from May to October. 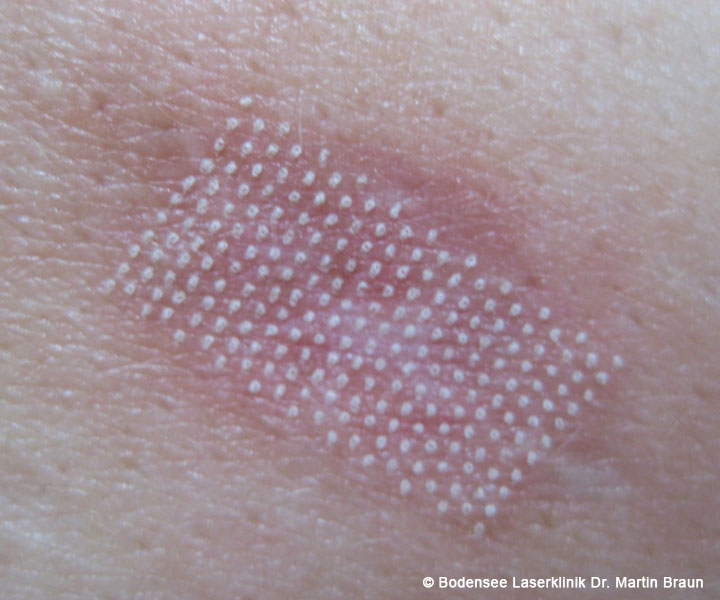 What is the exact course of treatment with laser PDT? The treatment proceeds in 2 steps, approximately 1.5-3 hours apart.

When you come for the 1st treatment, the cancerous skin area is first marked with a wipeable pen. Since the skin cancer cells, by their nature as spiny cells, keratinize on the skin surface (which is often noticed by the patient as a rough spot or crust), the keratinization (not always visible to the naked eye) must first be removed. This is done with the help of the fractionated CO2-Fraxel laser. You can also imagine this in such a way that - similar to painting a surface - the area to be treated is first roughened a little. This laser treatment is hardly painful and is usually felt as a slight burning sensation lasting less than 1 second.

In the picture: skin area roughened with laser before Metvix ointment is applied for PDT treatment.

Metvix cream is then applied to the laser-roughened area, allowing it to better penetrate the deeper layers of the skin. This procedure is known as LAAD - "laser assisted drug delivery." An opaque bandage is then applied and you can leave the clinic.

You will return to the clinic for the 2nd treatment on the same day - a few hours later. After the bandage is removed, the skin areas can now be

a) be precisely delineated with a lamp that emits a blue, so-called "black light". This so-called photodynamic diagnosis also makes it possible to detect skin cancer cells that are not visible to the naked eye.
b) Immediately afterwards, in another room, the skin site is irradiated with a special red light, high-energy red photons (light particles). Here the cancerous cells are destroyed and replaced by newly growing healthy cells. This is a light irradiation, not an X-ray irradiation! The treatment itself takes place in a quiet relaxed atmosphere and lasts about 2-6 minutes. If in most cases there is a burning sensation or pain in the treated area, we cool it with a cold air blower. An assistant is always present during the whole treatment. If desired, the treatment can also be performed under local anesthesia.

After the treatment, there is usually redness, sometimes swelling and scaling, rarely the formation of vesicles or crusts on the treated skin area. Sometimes a slight burning sensation may linger for several hours. This condition  may look like after a sunburn, but heals again without scarring. However, it is not a sunburn, but a mechanism of the skin to reject the destroyed skin cancer cells to the outside. This process is usually completed after 4-10 days. In contrast to X-ray irradiation, this PDLT treatment can be repeated without any problems if new skin cancer sites should appear.

in the picture: PDLT treatment in our clinic in a relaxed atmosphere. Cold air comes out of the tube held by the assistant for cooling.

As a rule, 1 to 2 (in some cases several) PDLT treatments are required at intervals of about 10-14 days (or more). This photodynamic laser therapy results not only in healing of the skin cancer, but also in smoothing of the skin.

Risks and side effects

Very rarely, an allergy to the Metvix cream can occur (which has never occurred in our case after almost 15 years of experience with thousands of patients), or - also absolutely rare - pigmentation (brownish discoloration) or longer-lasting redness can also occur. As a rule, these usually disappear again on their own, but can - if necessary - also be treated with special pigment or vascular lasers.

Please note: You should apply a good UV light protection (factor 50+ in the UV-B range, factor 35+ in the UV-A range) to the treated area for about 3-4 weeks during the light-rich season, which we can give you.
However, it is best if you get used to routinely applying this light protection to your face, head area, ears, neck and hands, and arms if necessary, every morning. Because prevention is better than cure.